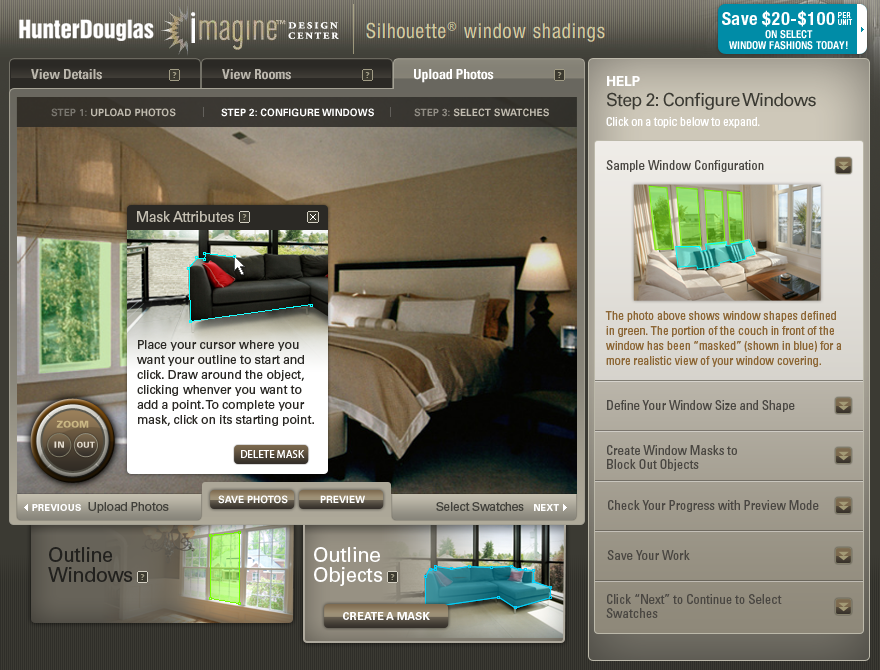 Enlighten was the agency of record for Hunter Douglas during this time, which meant that we handled a variety of web projects. Due to an internal departure on the Enlighten UX team, I was brought in to take over as the lead UX designer for Hunter Douglas.

Hunter Douglas, a leading seller of premium blinds, wanted to give users the ability to visualize their complete line of blinds in the customer’s home before buying. Customers would upload photos of their rooms, then overlay patterns that matched Hunter Douglas Blinds. Finally, they would receive information on purchasing blinds.

Despite challenges, the Enlighten team was able to deliver the ImagineIT product within a modified timeframe. The feature was well received by Hunter Douglas customers, and the landing page of iMagine is still available on their website today, though the tool has since been replaced.

We began with discovery calls with Hunter Douglas Stakeholders, including their project manager and an IT representative. This allowed us to better understand the outline of the project and the potential technical constraints. As the client had already done discovery with their customers, we did not need to speak with customers at this time.

Taking the discovery notes, I created a basic information architecture diagram and wireframes using Axure RP. I presented this to the client, which raised some technical issues around outlining items in the room pictures. I added additional documentation to the wireframes to accommodate this, then began working with a visual designer who created several design comps based on my wireframes.

Using those design comps, I stitched together a mid-fidelity prototype using Axure RP as set up a testing script with several tasks. Because we had no budget for in-depth user testing, I took the prototype to several internal stakeholders and conducted usability testing sessions with them. I wrote up the results and shared them with the client. We made some small modifications to the designs and then the project entered development.

During development, I maintained close communication with our Flash developer. Because of the complexity of the tool, we had to make sure to accommodate all of the corner cases. I then worked with our QA engineering to help write tests, and eventually iMagine was released.