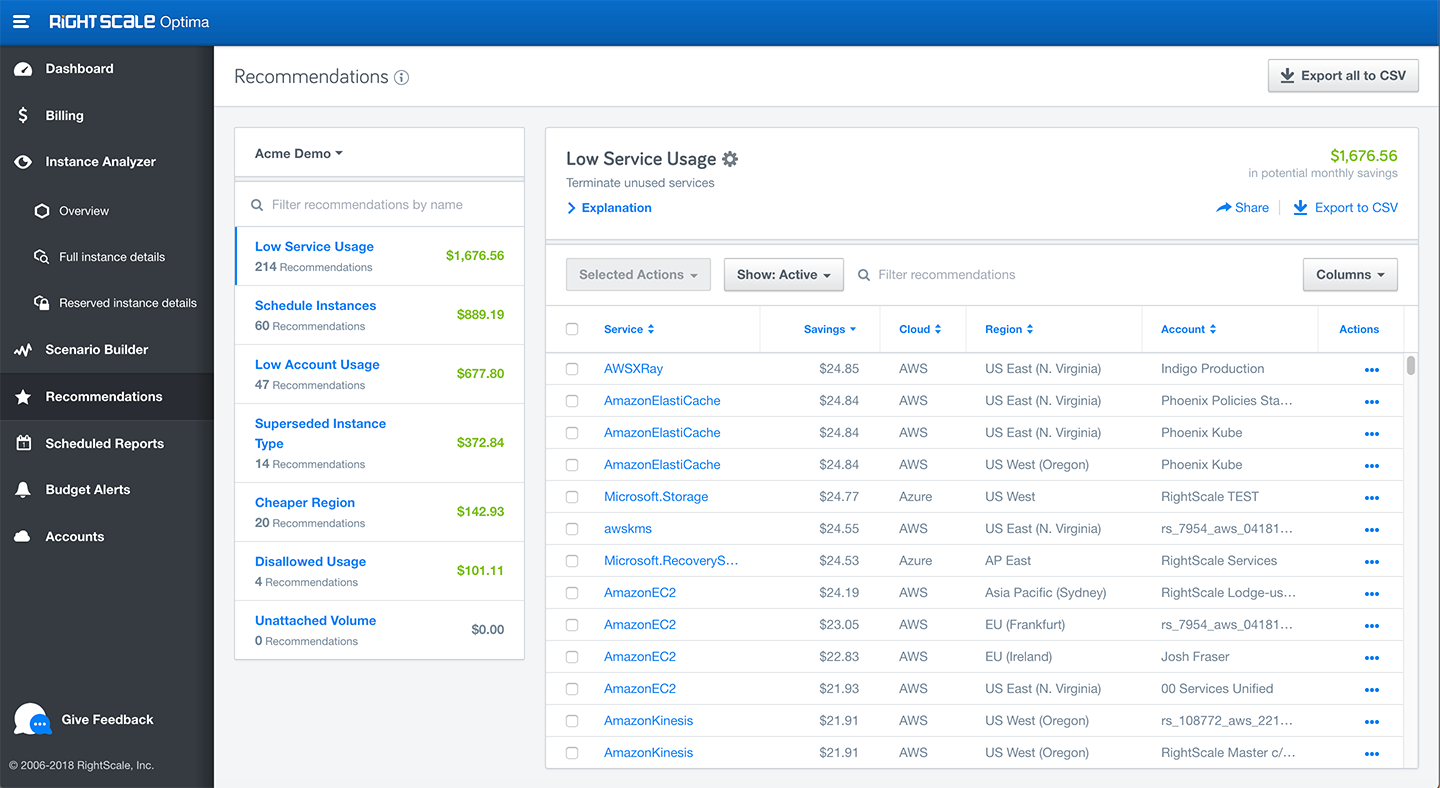 RightScale had made the corporate decision to pivot more strongly towards features around enterprise cloud cost adoption. As a result, management wanted to re-brand and relaunch our SMB-focused Cloud Analytics product. As part of this relaunch effort, they wanted to showcase a new feature that would offer tailored cost recommendations to customers. The product and UX teams were engaged to handle discovery and design for this important project. As the UX manager, I lead the efforts on UX research, and oversaw a senior and a junior UI designer on the project.

After significant design and discovery work, Optima was announced in April, 2017 and launched in July. The re-branding and recommendation engine brought new traffic to RightScale Marcom properties and increased our leads significantly for the next sales quarters, eventually leading to RightScale’s acquisition the following year. Our analytics KPIs showed that it was used by the vast majority of our existing enterprise customers in the first months.

For more information about Optima, see the marketing site and the documentation.

Product took the lead on the initial discovery phase, and I joined with the PMs on several parts of this process. We began by gathering data from internal stakeholders who had close customer involvements (sales, services, marketing) and reached out to interview several customers about their challenges around cost and need for recommendations. I also spoke with our architecture team to understand the initial recommendation engine that they were designing.

With this data, I created a flowchart for a recommendation system and shared it internally, iterating based on significant feedback from product and engineering. I also constructed a journey map and iterated on it based on internal feedback. These two artifacts drove the next stage of the design process. I also worked with product management to develop initial KPIs.

To maximize the time of the other two designers on the project, I divided our designs into categories based on the flowchart. Each of us tackled different categories by making mocks in Sketch, then combining them into artboards and prototypes in InVision. These were first shared internally, and we conducted several iterations based on internal feedback. I then took the InVision prototypes to about 5 customers for usability testing, with other team members showing them to additional customers. We noted the results of the usability tests, and used the feedback to continuing iterating on the designs.

At this point, we knew that the scope of the designs were greater than the engineering resources to deliver on our timeline, so we scoped the project back and build a final InVision prototype and Confluence page for the MVP that we planned to release. I worked closely with developers to ensure that the application being built matched the designs and solved for customer needs. I also configured our web analytics to track the metrics that we needed for the KPIs. We were able to show a beta version of the recommendation to select customers before releasing it publicly in July.